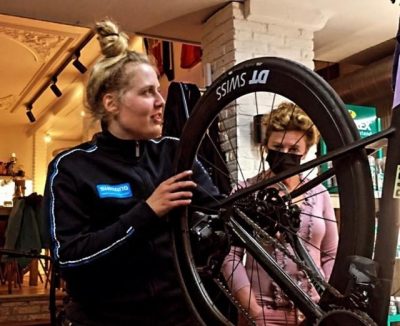 Shimano’s new 12-speed groupset is starting to be seen in your local cycle shop or community, but what is the difference between 11 and 12 speed? Is it just extra gear? We catch up with GT Krush Tunap’s head mechanic and Shimano service center mechanic, Nadine to find out.

The 12-speed groupset is not just an extra gear as Shimano has made several changes that will benefit both the performance and leisure cyclist. The first ch 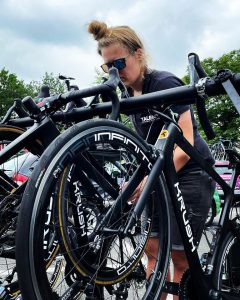 ange is to the safety of braking where Shimano has upgraded to their new revised mountain bike disc.

So how is this better and what does this mean? The rotors are prone to less heat-related deformation meaning you stop quicker and can brake harder and faster. This allows pro riders to push the edge of racing to a new level. The fluid bleed port is now relocated on the side of the caliper allowing an easier angle of access for the mechanic and preventing the problem of having to potentially the caliper as was the case with some of Shimano’s 11-speed setups.

One of the biggest differences is the look, given the fact, there are a lot fewer wires allowing for a neater look on a bike’s front end. Each of the shifters is now wireless with independent batteries. However, the main components such as both derailleurs still contain wires but they have been downsized for ease of usage. Due to this reduced wiring, the system relies on Bluetooth more than the 11 speed Di2 which allows for even faster shifting.  The rear mech is 58% faster and the front mech 45% faster, this again might just be the cutting-edge marginal gain pro cyclist need to win races.

As well as speed, comfort and durability are also important component on the bike. Instead of only being able to place two fingers below the shifter you can now place three fingers allowing for a more relaxed hand position. The battery also has an extended life giving you more peace of mind that you are not going to run out of ‘juice’ at the furthest point away from home on your ride.

The conclusion is it doesn’t matter if you are a World champion or a passionate weekend cyclist, Shimano’s 12 speed Di2 is going to make your experience on the bike considerably more pleasurable, it just might hurt your pockets slightly more!

Check course dates and availability via our online booking system.

where to find us

This website uses cookies to improve your experience while you navigate through the website. Out of these, the cookies that are categorized as necessary are stored on your browser as they are essential for the working of basic functionalities of the website. We also use third-party cookies that help us analyze and understand how you use this website. These cookies will be stored in your browser only with your consent. You also have the option to opt-out of these cookies. But opting out of some of these cookies may affect your browsing experience.
Necessary Always Enabled
Necessary cookies are absolutely essential for the website to function properly. This category only includes cookies that ensures basic functionalities and security features of the website. These cookies do not store any personal information.
Non-necessary
Any cookies that may not be particularly necessary for the website to function and is used specifically to collect user personal data via analytics, ads, other embedded contents are termed as non-necessary cookies. It is mandatory to procure user consent prior to running these cookies on your website.
SAVE & ACCEPT
Translate »