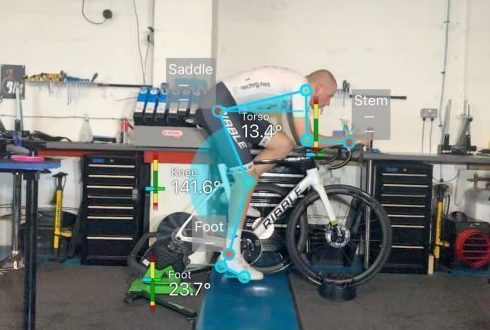 Ever wondered what is involved in a bike build, Fergus from Ribble recharge found out firsthand when he came to The Bike Inn to build his own race bike. The team are riding Ribble ESLR Frames. The first step was to lay all items out, see if items were missing, grab a coffee and start!

Fergus had previously only done basic mechanics on his bike at home, so this was a real challenge. Starting with the Di2 cables “The internal handlebar routing was tough, guiding the cables through bends was “incredibly fiddly” Fergus admitted, it took 2 hours alone, you have to be gentle with the wires are they are small, fragile, and expensive. Once cabling was in place it was time to start with the bigger items such as cranks, derailers etc. Lucky Furgus’s non-standard power meter/crank matches up with the Di2 gearing.

After many coffees, some di2 cable nursing, and skills learned the bike was in one piece! So what was left to do? Of course, a Bike Inn Bike fit! The process was in-depth using a combination of experience and technology to allow for a racing position to be created which is aero and maintains Fergus’s power output. As always for performance cycling, you are balancing the ability to produce power and being aero.

So with a new bike and correct position, Fergus looks forward to building on his season to compete in the u23 national series this coming summer. And what is that saying? If the bike does not behave blame the mechanic!

Check course dates and availability via our online booking system.

where to find us

This website uses cookies to improve your experience while you navigate through the website. Out of these, the cookies that are categorized as necessary are stored on your browser as they are essential for the working of basic functionalities of the website. We also use third-party cookies that help us analyze and understand how you use this website. These cookies will be stored in your browser only with your consent. You also have the option to opt-out of these cookies. But opting out of some of these cookies may affect your browsing experience.
Necessary Always Enabled
Necessary cookies are absolutely essential for the website to function properly. This category only includes cookies that ensures basic functionalities and security features of the website. These cookies do not store any personal information.
Non-necessary
Any cookies that may not be particularly necessary for the website to function and is used specifically to collect user personal data via analytics, ads, other embedded contents are termed as non-necessary cookies. It is mandatory to procure user consent prior to running these cookies on your website.
SAVE & ACCEPT
Translate »